Cats establish their home hunting ranges by scent marking them. Males will physically defend their ranges from other males, but females usually share or overlap their home range with other females.

The size of a home range or territory can be up to 6km2 (~20 city blocks). Because cats in the wild hunt small prey, they tend to lead solitary lives so each cat gets enough to eat. If a food resource is very plentiful, cats may live in small groups, 2-25, consisting mainly of females. 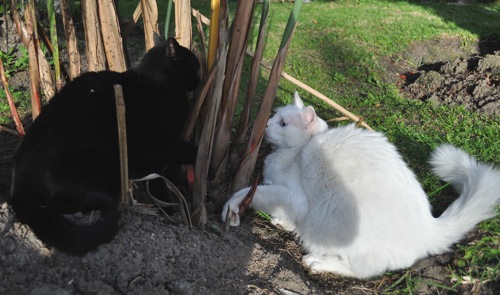 Male cats generally live alone regardless of food source, because they also compete with other males for mates. Cats can be aggressive when defending territories, fearful when threatened, engage in play behavior with one another (especially as kittens), and groom each other throughout adulthood.

Mothers and other females in their group raise the kittens. Kittens begin to sample the mother's kill while still nursing, and begin to hunt alone at 8 to 16 weeks of age. They generally rest and groom together with their mothers until they are 6 to 12 months old. Adult males patrolling the mother's home range usually evict the juvenile males; juvenile females may leave if food resources are low. Adults establish their own home territory (range), and may be dominant or subordinate within the parts of their range that overlap that of other cats.

Sometimes cats play a little too hard and may scratch or bite you. You can teach your cat to inhibit this inappropriate play behavior by leaving the area when your cat is not playing nicely!