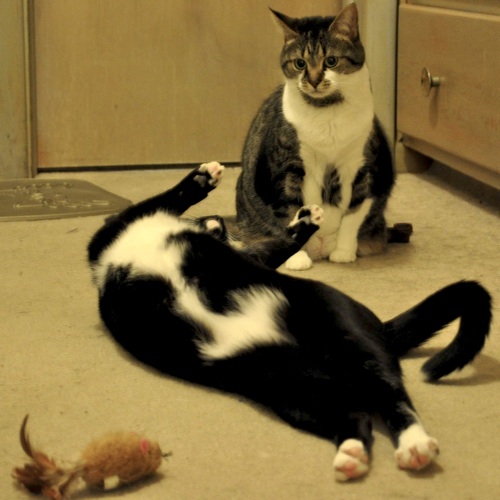 Cats react quickly when their feelings of safety are threatened. Some become aggressive, some become withdrawn, and some become sick. In our experience, conflict is the most common reason that some health problems occur in multiple indoor-cat households. Conflict among cats can develop because of threats to their status or rank in the home, from other animals in the home, or from outside cats. With a little practice, you can recognize the signs of conflict and find out if it is a problem for your cats. If it is, you usually can identify the causes. Once this has been done, you are well on your way to reducing the conflict. Of course, some conflict between housemates is normal, regardless of species. Our goal is to reduce unhealthy conflict to a more manageable level for the cats involved. 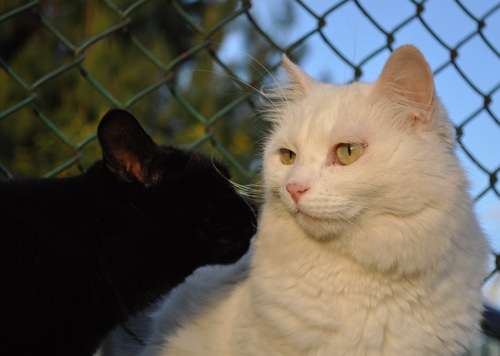 Signs of conflict between cats can be open or silent. Signs of open conflict are easy to recognize; the cats may stalk each other, hiss, and turn sideways with legs straight and hair standing on end up to make themselves look larger. If neither backs down, the displays may increase to swatting, wrestling, and biting. The signs of silent conflict can be so subtle they are easily missed. The cat creating the conflict can be identified as the one that never backs away from other cats, denies other cats access to resources, stares at other cats, and lowers its head and neck while elevating its hindquarters as it approaches less confident cats. The hair along its back, on its tail and tail base may stand on end, although not to the extent of cats engaged in open conflict, and it may emit a low growl. The cat creating the conflict eventually may only have to approach or stare at another cat for it to leave a resource such as food or a litter box.

The signs of conflict can result from three types of conflict; offensive, defensive, and re-directed. In offensive conflict, the more confident cat moves closer to the other cats, and to control the interaction. In defensive conflict situations, a cat tries to increase the distance between itself and something it perceives as a threat. In re-directed conflict, the threatened cat may not defend itself from the more confident cat, but become threatening to a less threatening cat. Although cats engaged in any type of conflict may spray or eliminate outside the litter box, we find that threatened cats are most likely to develop cystitis.

The most common cause of conflict between indoor-housed cats is competition for resources. Cats may engage in open or silent conflict over space, food, water, litter boxes, perches, sunny areas, safe places where the cat can watch its environment, or attention from people. There may be no apparent threat to access to these resources for conflict to develop. The change may only be the cat's perceptions of how much control it wants over the environment or its housemates' behaviors. 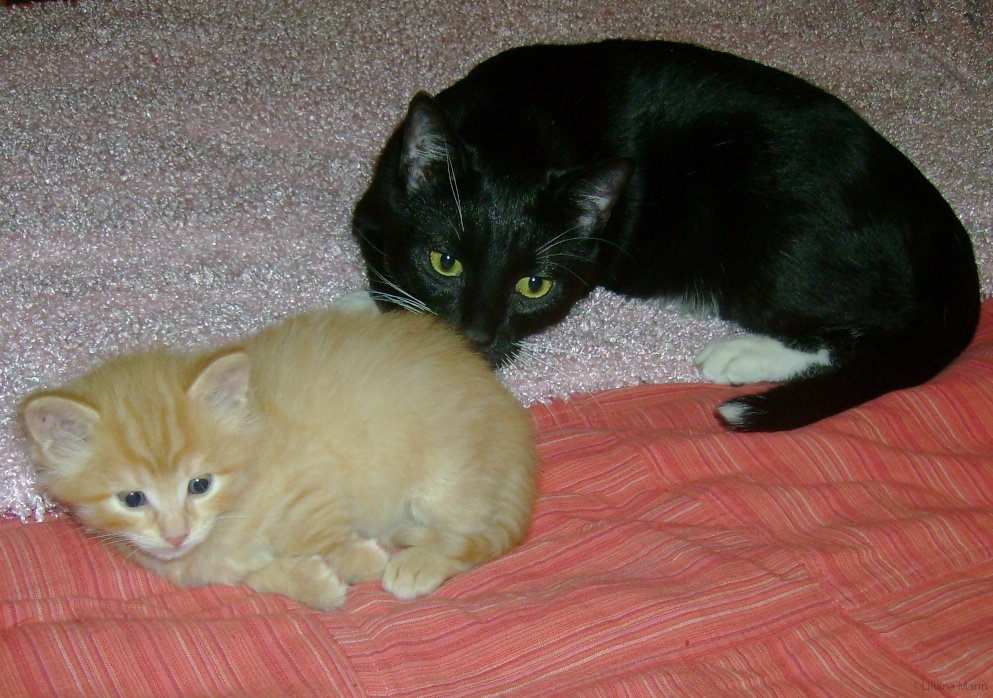 Open conflict is most likely to occur when a new cat is introduced into the house, and when cats that have known each other since kittenhood reach social maturity. Conflict occurring when a new cat is introduced is easy to understand, and good directions are available for introducing the new cat to the current residents. Owners may be puzzled by conflict that starts when one of their cats becomes socially mature, or when a socially mature cat perceives that one of its housemates is becoming socially mature. Cats can become socially mature anytime between 2 and 5 years of age, and start to take some control of the social groups and their activities. This may lead to open conflict between males, between females, or between males and females. Although owners may be surprised, "because they lived so well together for the first few years of their lives!", cat's perceptions of resource needs may expand with social maturity.

Cats that are familiar with each other but unevenly matched often show conflict in more subtle ways. One of the cats in the conflict asserts itself, and another cat is threatened by this cat's actions. Silent conflicts may not even be recognized until the threatened cat begins to hide from the assertive cat, to hiss or fight back when it sees the other cat, to start threatening other cats, or when it develops a health problem.

In addition to the signs of conflict described above, the assertive cat can be identified by its marking behavior. These cats rub their cheeks, head, chin, and tail on people, doorways, and furniture at cat height. Unfortunately, silent conflict can also involve urine; including marking by the assertive or the threatened cat, and cystitis by the threatened cat. Conflict-related urine marking can include spraying, when the cat treads and kneads, raises its tail, and flicks the tip of it while spraying urine on a vertical surface or squatting and urinating outside the litter box (non-spray marking). Both males and females may spray, and while neutering reduces the frequency of spraying, it cannot eliminate the behavior. Conflict-related urine marking can be exhibited by either the aggressor or the victim, but in our experience, cystitis usually occurs in the victim. We have even seen threatened male cats spray bloody urine! Cats that urinate on bedspreads or other elevated, open places may be doing so if their access to the litter box is threatened by another cat, or when they are afraid to use the box because it is placed such that a quick escape from another cat would not be possible.

Treatment for conflict between cats involves providing a separate set of resources for each cat, preferably in locations where the cats can use them without being seen by other cats. This lets the cats avoid each other if they choose to without being deprived of an essential resource. Conflict also can be reduced by neutering all of the cats, and by keeping all nails trimmed as short as possible. Whenever the cats involved in the conflict can not be directly supervised, they may need to be separated. This may mean that two of three cats in the household can stay together, but that the victim of the conflict is provided a refuge from the other cats. This room should contain all necessary resources for the cat staying in it. 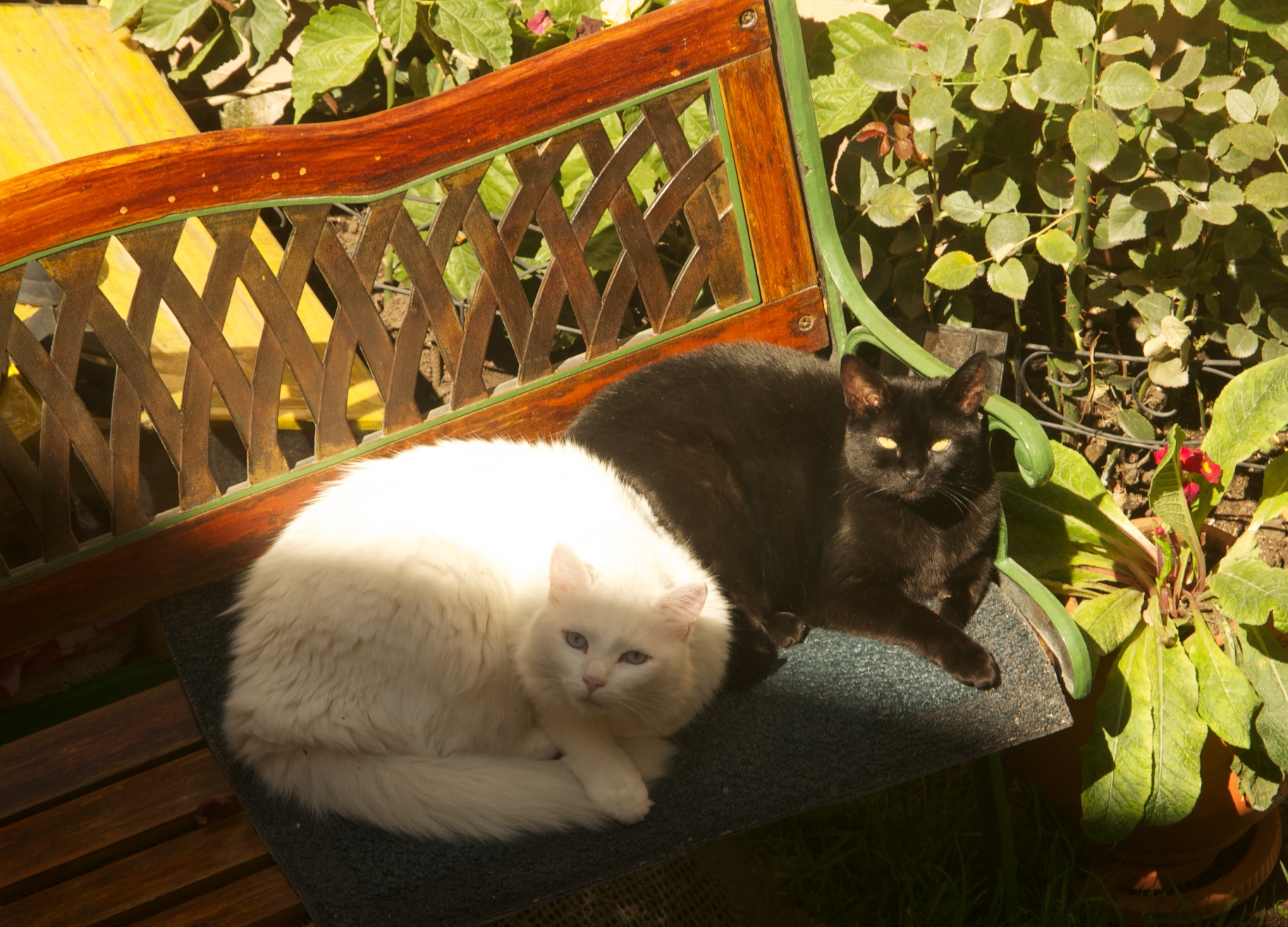 Cats generally require and use more space than the average house or apartment affords them. The addition of three-dimensional spaces such as kitty condos, cardboard boxes, beds, or crates may provide enough space to reduce conflict to a tolerable level. In severe situations, some cats may benefit from behavior-modifying medications. In our experience, however, medication may help after environmental enrichment has occurred, but it cannot replace it.

The cats involved in the conflict may never be "best friends", but they usually can live together without showing signs of conflict or conflict-related disease. Once the situation is under control, a behaviorist may be consulted for assistance in desensitizing and counter conditioning of cats in conflict so they can share the same spaces more comfortably if this is desired.

Resolving conflict with other animals, dogs, children, or adults is more straightforward. In addition to being solitary hunters of small prey, cats are small prey themselves for other carnivores, including dogs. Regardless of how sure we are that our dog will not hurt our cat, to the cat the dogs is a predator. If the cat does not assert dominance over the dog, which often happens, it must be provided ways to escape at any time. For humans, it usually suffices to teach children and guests that cats may not understand rough treatment as play, but as a predatory threat.

Most cats in urban areas in the United States are housed indoors and neutered, so conflict with outside cats can occur when a new cat enters the area around the house the affected cat lives in. To cats, windows are no protection from a threatening cat outside. If cats roaming outside are the source of the problem, a variety of strategies and products to make your garden less desirable to them are available.